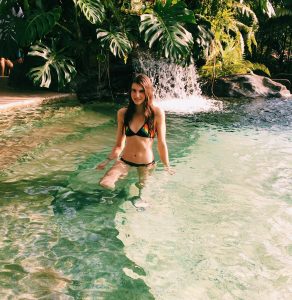 Over the break, my family and I traveled to Costa Rica for a week. None of us had ever been there before, so it was quite the 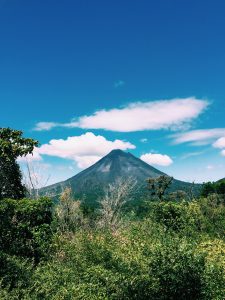 adventure. While we were there, we visited the town of La Fortuna and the province of Guanacaste. In La Fortuna, you can catch a view of the beautiful Arenal Volcano that looms about 5,500 feet in the sky. The volcano has recently stopped erupting in 2010, after being active for over 40 years. We stayed in the La Fortuna area for five days and then drove four hours west to Guanacaste along the coast. In Guanacaste, we stayed near Tamarindo, which is famous for its long, rolling waves, which are perfect for surfing.

My favorite part of my trip was seeing all of the amazing wildlife living in Costa Rica. Costa Rica is known for being home to over 500,000 different species of animals! While I was there, I saw monkeys, toucans, snakes, sloths, beautiful butterflies, dolphins, and more. It was really cool to see these animals living in the wild because that isn’t something I’ve ever seen before in the U.S.

My least favorite part of the trip was the four-hour drive from Arenal in the jungle all the way to the coast of Guanacaste. Although the drive was beautiful, featuring views of the bright blue Lake Arenal, the drive was painfully slow due to winding, one-lane roads. 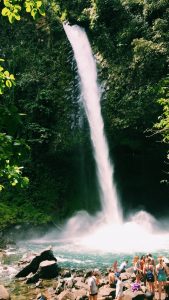 While I was there, my family and I did a little bit of sight-seeing. We hiked down 500 steps to see the La Fortuna Waterfall, and it was definitely worth it! The waterfall was breathtaking, and a sight that I will never forget. We got to swim right below the waterfall, but the water was freezing. We also drove up to see the Arenal Volcano, which was also quite beautiful.

During our stay, we went waterfall rappelling, white water rafting, ziplining, and surfing. 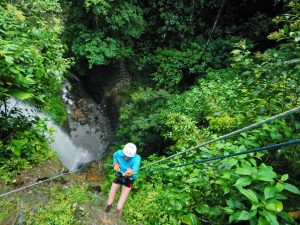 There was so much to do there, which was perfect for my family, who loves to stay active during vacation. But my favorite activity would have to be waterfall rappelling. This was our first activity, so the excitement buildup for this activity was the highest. It was also raining off and on throughout this day (we were in the rainforest), but surprisingly this only added to the fun since we were already soaked from rappelling through the waterfalls anyway. A tour company picked us up from the hotel and took us to their base camp, where they served us a traditional Costa Rican meal including rice, beans, chicken, plantains, and fruit juice. Next, our tour guides drove us up in carts through a small, bumpy dirt road to the start of the trail. We geared up and headed to the first waterfall, which was the tallest (165 ft)! It was scary climbing down, but once we got the hang of it, it was super exciting. After that, we proceeded to rappel down four more waterfalls and go on a zip-line that ended with a drop into the water. This was a great kickoff to an amazing trip.

The activity I enjoyed the least was surfing at Tamarindo beach. Although the beach was stunning and the waves were the perfect height, it wasn’t easy to learn how to surf in such a short time period. I struggled to keep my balance and ended up swimming in the magnificent water more than actually surfing. 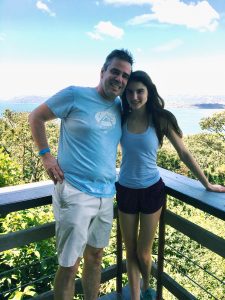 All of the food we had in Costa Rica was great. Breakfast included delicious fruits such as papaya and mangoes, coconut water, and pastries. Lunch consisted of traditional rice, beans, and chicken, which we ate daily. For dinner, however, we switched it up, eating at different restaurants every night. My favorite restaurant was Mis Amores located at the first hotel we stayed at in the jungle called The Nayara. Here they served pizza, pasta, and an assortment of seafood. And for dessert, we enjoyed a tasty chocolate ganache tart with ice cream. 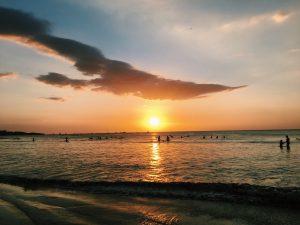 the JW Marriott Guanacaste. I enjoyed all of them for different reasons, but the Springs was my favorite. This was because the springs was the most kid-friendly and that there was so much to do there. At the Springs, there is a magnificent view of the Arenal Volcano and 26 natural hot spring pools. The hot springs varied in temperature and were super fun to play and relax in. There was even a water slide going into one of them! The Springs also has an adventure club called Club Rio about a mile away from the hotel. Once the shuttle takes you there, you may enjoy tubing or kayaking on the Arenal River, as well as more natural hot springs and a wildlife center. Overall, the Springs is a beautiful yet entertaining hotel that is perfect for everyone.

In Costa Rica, I was able to experience a new and unique culture. One saying that you will often hear if you go to Costa Rica is “Pura Vida” this means ‘pure life’ in English and is a perfect way to describe the easy-going, laid back lifestyle that Costa Rica embodies. I highly recommend traveling to Costa Rica, and I hope to go back again sometime soon.