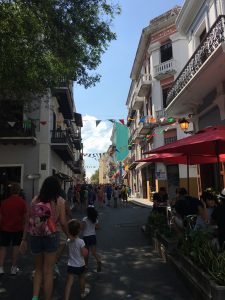 in Old San Juan, an old fort that Spain built to defend against the city’s attacks. I also went to El Yunque National Rainforest and saw many waterfalls. Also, I took a van with my family, drove around the town, and saw many different sights.

My favorite part of my trip was going on a hike. We also went ATV riding through a Puerto Rican farm during the hike, repelling into a cave, cave exploring, zip-lining, and went on a tour through the canopies. After the day filled with
adventure, we ate a traditional Puerto Rican lunch at the Mojito Bar.

In addition, I went on a bioluminescent trip. On this trip, we went kayaking through a small channel underneath 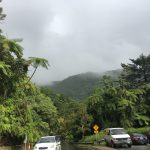 mangrove trees. The trees made it very dark and hard to see, and since it was at night and already very dark, it made the channel pitch black for most of the time. Many creatures fell into the water during this experience, which was especially scary for me since I couldn’t even see them. Once we got out of the channel, we came into a bay. The tour guide then showed us that the plankton in the water would light up when you disturb the water. They light up in the same way as fireflies do. We also saw a few fish that had a small glow to them. After that, we kayaked back to the starting point and got out of our kayaks. After we got out of the kayaks, we saw many shrimp in our kayaks where our feet were, which was super cool!

My least favorite part of my trip was going into a cave because I dislike bugs, and there were many bugs, such as
cockroaches and spiders in the cave, along with bats and snakes.

My favorite restaurant was between Serafina and Oceano. The food was very different at both restaurants. Serafina is an Italian restaurant. Oceano was a little nicer than Serafina, but the food wasn’t that upscale that I couldn’t find anything I wanted to eat. At Serafina, I had the great margarita pizza. At Oceano, I had grilled chicken and vegetables.

I stayed at the hotel La Concha which I liked. The hotel was calm during the day while you relaxed at the pool or the beach. But at night, there was a DJ and some live events. 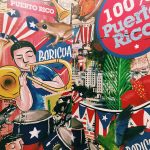 I learned many new things about Puerto Rico, but one thing that stood out to me was that even though Puerto Rico is part of the United States of America, they still cannot vote in the presidential election, even though the current president, Donald Trump, is theirs as well.  Puerto Rico deserves a definite thumbs up!