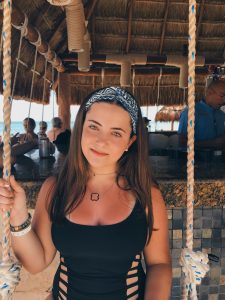 This spring break, I went to St Lucia, an island in the Caribbean. I stayed at a resort called The Landings.

My favorite part of the vacation was spending the day in an open jeep truck touring the island of St Lucia. We got to go into a volcano and mud baths. Not only was this a cultural experience, but it was also a once in a lifetime one. The volcano had a strong sulfur smell, but it was worth it.

The trip overall was nothing but fun. Although, if I had to choose a least favorite part, it would have been a dinner in particular. One of the first nights of the vacation, we went out of the resort for dinner. We went into the town of Rodney Bay. The restaurant was called Spinnakers and had several stray cats and dogs roaming around and lousy food.

Throughout the trip, we did do some sightseeing. However, the view from the beach outside the room was a sight to see itself. My sister, mom, and I went on a trip in an open jeep and explored some of the island. We drove throughout the island for hours, looking at the breathtaking views. We also managed to hike up a waterfall, go through Souferié Volcano, and into the famous mud baths.

Another day, my whole family spent a day on a catamaran sailboat. On the boat ride, we passed the houses of famous residents such as Mick Jagger and George Foreman. We also had a constant view of a nearby fort called Fort Rodney, which rested upon Pigeon Mountain. For the most part, all of the activities stood out to me, yet if I had to pick a few, these would be what I suggest.  Definitely, swimming off of the catamaran and then snorkeling in the ocean is a must, especially because this was an experience I’d never had before. Also, riding in the open jeep and going in the mud baths were amazing for the skin. Lastly, jet skiing was a super thrilling and fun experience, yet a bit nerve-racking. 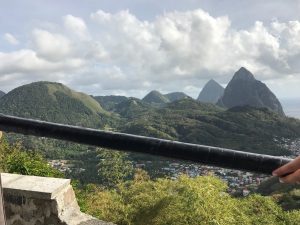 The activity I enjoyed the least was hiking up to the waterfall. The waterfall was reasonably small and very rocky. We were also instructed that flip flops were the shoes to wear, yet I don’t think that they are great shoes to hike in in the future.

Two restaurants stood out to me throughout the trip. One was a local barbecue restaurant called Delirious, which was nearby in Rodney Bay. The restaurant ranged from mac and cheese to smoked chicken to mini sliders. All of it was delicious, and the vibes were family-friendly. The other restaurant was located within the Resort called The Palms. This restaurant was more upscale but definitely tasty. 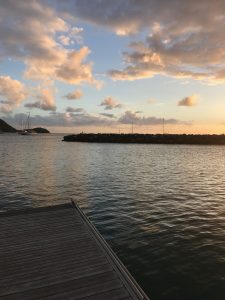 The Landings was a gorgeous hotel. For a family like mine, of six, the suite was pretty big. Whether the room’s view was the beach, Rodney Bay, the marina, or Pigeon Island, you were in luck. The service at the resort was adequate. They had several booking mistakes and a lack of services on the beach. Yet, they were quick to make up for their mishaps. The beach Restaurant was delicious, but the service was slow; needless to say, they were running on island time. The resort featured a state of the art gym and spa. Also, there were four pools spread through the resort and the in-room hot tubs. The beach was gorgeous with clear blue waters. On the beach, the resort had activities such as tubing, kayaking, and paddleboarding. There were many children at the resort. For the most part, the hotel was a hit, but I would like to try another resort if on the island again in the future.

On some of the sightseeing trips, we were able to learn about the culture of the island. Our tour guide, Lloyd, told us that a popular fish served on the island, mahi-mahi, can sometimes be found on the menu as dolphin, yet it is not a dolphin.  St Lucia is a thumbs up.